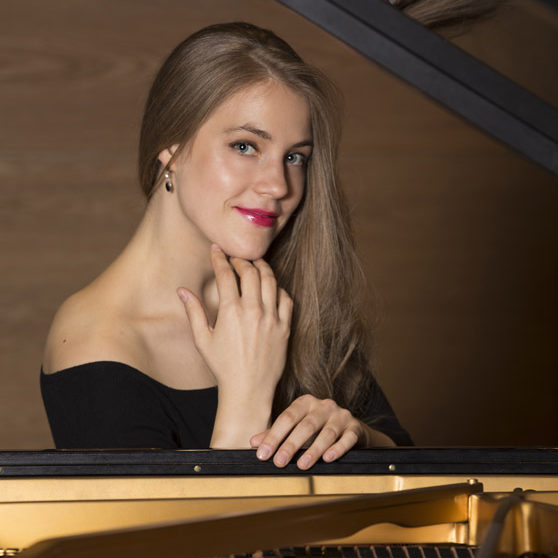 Anna Szałucka is an exciting Polish pianist recognized for her exceptional musicality and intense virtuosity. She completed her Bachelor Degree at the Stanisław Moniuszko Academy of Music in Gdańsk studying with Waldemar Wojtal. She then continued her studies at the Universität für Musik und Darstellende Kunst Wien in piano class of Stefan Vladar, and continued her studies at the Royal Academy of Music in London, where she is currently holding a piano fellowship under the tutelage of Ian Fountain. In November 2016 she won the 1st Prize and the the Eller, Orchestra, Recital and Estonian Museum Awards at the 3rd Tallinn International Piano Competition.

Anna is a laureate of various other competitions. Her achievements include the 1st Prize in Young Pianists Forum in Rybnik and the 2nd Prize and The Special Prize of Jerzy Waldorff on IX International Competition for Young Pianists “Arthur Rubinstein in Memoriam” in Bydgoszcz, Poland. During her studies in London she’s been awarded The Worshipful Company of Musicians – Harriet Cohen Bach Prize, 2nd Prize and the Audience Prize at the Sheepdrove Intercollegiate Piano Competition as well as the 3rd Prize in the International Sussex Piano Competition. In September 2018 Anna performed in the Finals of the 1st International Szymanowski Music Competition in Katowice.

Anna Szałucka has given numerous concerts and recitals around the world cooperating with institutions such as The National Fryderyk Chopin Institute, Wiener Beethoven Gesellschaft, The Arthur Rubinstein International Music Foundation, The Worshipful Company of Musicians, as well as BBC Radio 3, BBC Radio 4, Polish Radio and Classic FM. She released her debut CD with Naxos in 2018. Appearances as a soloist with orchestra include concerts with the Estonian National Symphony Orchestra, Polish Radio Symphony Orchestra, Worthing Symphony Orchestra, Sinfonia Baltica and Pomeranian Philharmonics, among others. Anna has developed her passion for music by taking part in masterclasses with renowned musicians including Pierre-Laurent Aimard, Olga Kern, Imogen Cooper, Steven Isserlis, Lee Kum-Sing, Andrzej Jasiński, and many others.

As the Royal Academy of Music scholar Anna was generously supported by the Leverhulme Trust and the Oetker Scholarship. During her studies she won The Jacob Barnes Piano Scholarship and Kenneth Loveland Gift Prize. Upon her graduation she was awarded The Walter MacFarran and Alexander Kelly Memorial Prizes as well as The Regency Award. Most recently she has been supported by The Imogen Cooper Music Trust. In Poland, she received a scholarship from the Marshal of the Pomeranian Voivodeship, the President of Gdańsk City and the Principal of the Stanisław Moniuszko Academy of Music in Gdańsk. She was also awarded the Ministry of Science and Higher Education Prize as well as Ministry of Culture and National Heritage Prize.